FIRST AWARD of the 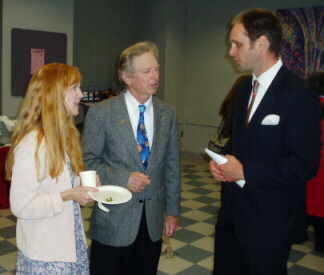 At the Commencement of the Boston University School of Theology on 22 May 2005, Dean John Berthrong announced the first award of the Scholarship to

Gregory A. Maslowe, candidate for Doctor of Philosophy, Class of 2006

Greg earned his MTS in Philosophical Theology at the Pacific Lutheran Theological Seminary in Berkley under Prof. Ted Peters. He then worked with Prof. Bob Herrmann at Gordon College as the Regional Coordinator of the Science and Religion Course Program, organizing conferences on science and religion at Gordon College and MIT. He is presently enrolled in the Science, Philosophy, and Religion Course Program at the BU school of theology and working on his Ph. D. dissertation under the direction of Prof. Wesley Wildman.

Greg's goal is to stabilize the controversy over genetically modified organisms in agriculture. Genetically modified agriculture is allowed in the United States but banned in Europe and many third-world counties. An African country refused to accept genetically modified corn that the U. S. sent to alleviate starvation. He plans to stabilize this situation by developing an ethical norm that both sides might find acceptable. He calls this the "deference norm," which is based on deference to the integrity of nature. Scientists have ways of measuring the integrity of nature. If human modifications completely destroy a native species, then the integrity of nature is broken and modification would be unethical. On the other hand, if the species has the possibility of returning to its native state, then modification would be ethical. Integrity appears as guiding principle in policy statements by the United States, Canada, Brazil, and the United Nations.