SECOND AWARD of the 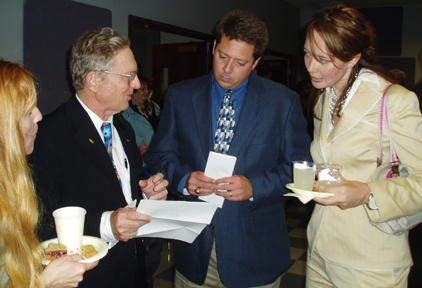 At the Commencement of the Boston University School of Theology on 14 May 2006, Dean John Berthrong announced the second award of the Scholarship to Paul Cassell, who is doing research on the psychology of the religious experience as part of BU's Science, Philosophy, and Religion Program.

Paul is doing research on the cognitive and neurological dimensions of religious experience, in the spirit of William James's "Varieties of Religious Experience."

He is presently analyzing the results of a questionnaire, which is attempting to confirm Pascal Boyer's "Religious Templates." The template or pattern of religious experiences is that they contradict our normal expectations. Paul Cassell took off his ring as he said: "If I were to let go of this ring, you would expect it to drop." If it did not drop, that would contradict our expectation, as when Jesus walked on water! Our memory and recall of such events is much greater than for normal cognitive experiences.

Paul is also studying the function of the brain's temporal lobe in the religious template. Religious experiences can be correlated with increased activity in the temporal lobe. Gifted people like the writer Dostoievsky and the painter van Gogh had temporal lobe epilepsy. St. Paul in his epistles spoke of his "thorn in the flesh," which was never identified. During St. Paul's famous conversion, described in the Book of Acts, he saw a light from heaven, which blinded him for three days. This could have some connection to temporal lobe epilepsy.

Paul Cassell's basic thesis is that discernible rules and features govern the following: the transition from non-life to life, from animal consciousness to human self-consciousness, and from human religiousness to revelation-embodying religious communities.