DOES GOD PLAY DICE?
Answers from the Fractal Geometry of Nature

"I am convinced the Old One does not play dice."

"I do not believe that God could have created us in His Image by the mutations of the genes."

New findings about the fractal geometry of nature, chaos, and complexity challenge these negative statements about the statistical nature of the physical world. Einstein and Smith reflect the old metaphor: chaos and randomness are bad. Scientists have recently discovered that many phenomena, from the fluctuations of the stock market to variations in our weather, have the same underlying order. Natural beauty from plants to snowflakes is described by fractal geometry, a complex interplay between randomness (symbolized by dice) and global determinism (which loads the dice.) Darwin's theory of evolution is similar to fractal analysis: the randomness of mutations and global natural selection. We shall show how old metaphors are being replaced by the new, such as one by chaos theorist Joseph Ford (Gleick):

"God plays dice with the universe, but they're loaded dice."

"NOISE IS GOOD," said Prof. Robert Hilborn (Hilborn) in his paper "Nonlinear Dynamics and Pattern Formation: Where We Are and Where We Are Going" (presented at the New England Section of the American Physical Society Meeting, MiddleburyCollege, 31 Mar 2001.) Random noise added to a signal can increase detectability in a system having a threshold. A familiar example is a hearing test in which one is asked to press a button as soon as the sound is loud enough to be heard. The noisy hiss adds to the coherent sound signal and enables it to trigger the hearing threshold. Thus, a lower level signal with noise can be detected better than one without noise. Of course, the noisy hiss can not be so large as to drown out the signal. "A LITTLE NOISE IS GOOD" is a more precise statement.

THE FRACTAL GEOMETRY OF NATURE:

What might appear as random noise has in some cases been discovered to have an underlying order. For example, the fluctuations of the stock market obey fractal statistics (Peters). A number of physicists are using this analysis as an investment strategy to make money on the market (Bass). Nature offers many examples of fractal statistics: branching in our lungs and in plants; variations in the flooding of the Nile river, of rainfall and of tree-rings (Peters). 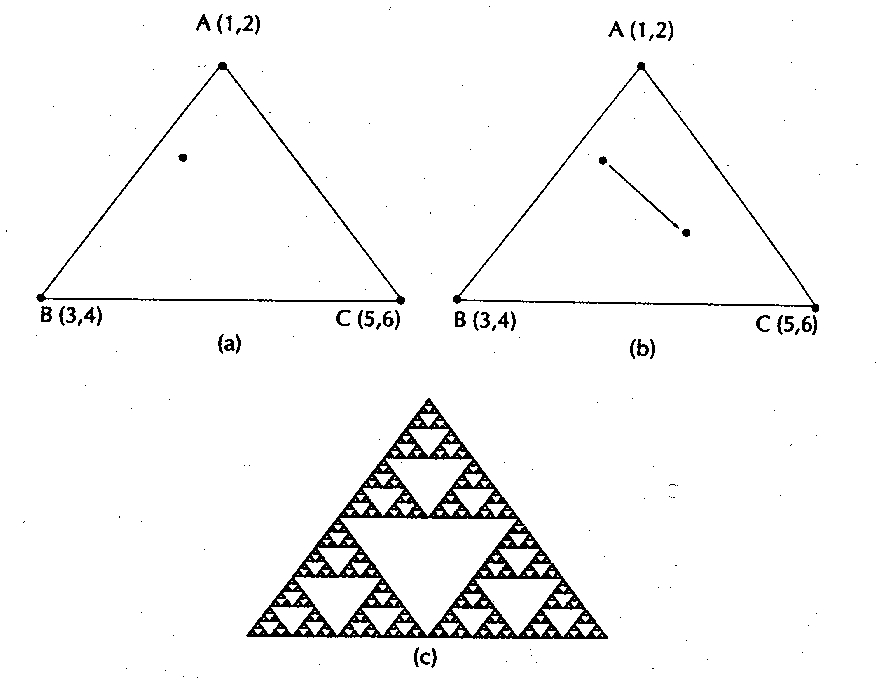 We will now play the Chaos Game to generate the Sierpinski triangle in Figure "c" above.  RANDOMLY draw a point as shown in Figure "a" above. Next role a fair die to determine the direction of the next point. In Figure "b " above, the role of the die was a 5 or a 6, which corresponds to vortex C.  Then apply the GLOBAL rule: draw a point half way to C(5,6). This algorithm is repeated again at each new point.  A computer was programmed to apply this rule 10, 000 times to generate the points inside the triangle shown in Figure "c". (The first 50 points are discarded as "transients.") These 9950 points form the black granular background inside the orderly fractal or Sierpinski triangle shown in Figure "c." The Chaos Game shows that local RANDOMNESS and GLOBAL determination can coexist to create an orderly, self-similar structure called a fractal (Peters).

The branching of the tubes in our lung as well as that of plants is described by fractal scaling. For example, the diameter D(G) of our bronchial tubes is related to the diameter of our main trachea D(0) by

Each generation or set of smaller tubes is scaled down by this factor (Peters). Of course, not all the smaller tubes are the same size, but have a statistical distribution about the mean value given by the global equation above. All fractals have global determinism (average tube size) and local randomness (diameter of individual branches.) The fractal structure is more stable and error-tolerant than the more deterministic, Euclidean geometry. This is why fractals are so common in nature from tree trunks and branches to the intricate vein structure of leaves.

The variations in natural phenomena such as the flooding of the Nile River, rainfall, tree rings, noise-caused-errors in electronic transmission lines can also be characterized by fractal statistics. Hurst (1900-1978) worked on the Nile River Dam Project. Most hydrologists had assumed that water inflow is a random process. Hurst, however, studied the 847-year record that the Egyptians had kept of the Nile river's overflows, from 622 to 1469 A. D. To him, the record did not appear random. Larger-than-average overflows were more likely to be followed by more large overflows. (Joseph Effect of seven years of great plenty in the land of Egypt followed by seven years of famine.) Suddenly, the process would change (Noah Effect) to a lower-than-average overflow. Overall, there appeared to be cycles, but their length was nonperiodic. Hurst's mathematical analysis revealed that the Nile river's overflows were described by fractal statistics, which is more like picking a card from a stacked deck than from one that has been shuffled to be truly random. The stacking algorithm is the global rule that characterizes fractal statistics.

Darwin's theory of evolution is similar to fractal analysis: the individual randomness of mutations and the global determinism of natural selection. Since "no news is good news," the people who rejected Darwin's theory got more publicity than those who accepted it. For example, after reading Darwin's "Origin of the Species" in 1859, Henry D. Thoreau wrote:

"The development theory (evolution) implies a greater vital force in nature, because it is more flexible and accommodating, and equivalent to a sort of constant new creation."

Darwinian evolution does not have design built in as a premise, but the design EMERGES as variations occur and some organisms get naturally selected over others(Ruse). It is analogous to the algorithm for generating the fractal triangle. The intricate design of the Sierpinski  triangle containing smaller fractal triangles EMERGES as a result of applying randomness  with the global law.

The engineering community has discovered that computer simulations of Darwin's evolution, called genetic algorithms, are very effective for optimizing physical devices. Dr. Edward Altshuler (Altshuler) of the Air Force Research Laboratory has discovered that the genetic algorithm has enable him to design antennas having much better performance than he would have been able to conceive of based on his many years of conventional design experience. The genetic algorithm starts with millions of RANDOMIZED antenna dimensions. The antenna's performance is then calculated, and the best are then SELECTED as being closest to that desired. The next generation of antennas is made by "sexually mating" the best antennas. Half of dimensions of each new generation are chosen from the old generation. These theoretical design predictions are in good agreement with experimental performance. Darwin's theory of evolution, discovered from nature, is very effective at optimizing the man-made world.

The development of a baby's neural system is a good example of natural selection. A baby has a number of neurons in parallel.  The nerve that is dominant and  used is the one that survives. The other nerves atrophy and die. "Use it or lose it."

Biochemist Arthur Peacocke, winner of 2001 Templeton Prize for Progress in Religion (the $1M prize is more than the Nobel Prize) states: "Instead of being daunted by the role of chance in genetic mutations as being the manifestation of irrationality in the universe, it would be more consistent with the observations to assert that the full gamut of the potentialities of living matter could be explored only throught the agency of rapid and frequent randomization. This is possible at the level of DNA." Chance operating within a law-like framework is the basis of the inherent creativity of the natural order, in its ability to generate new forms of matter and life. As in many games, the consequences of the fall of the dice depend very much on the rules of the game.

Einstein, having published a paper on random Brownian motion would, I believe, if he were alive today, be fascinated by the discovery of fractal statistics. Houston Smith might want to reconsider his doubt that God creates through the random mutations of evolution. He overlooked the global determinism of natural selection.

"God plays dice with the universe, but they're loaded dice," (Joseph Ford of Georgia  Institute of Technology.")

This conclusion is consistent with  20TH and 21st century theology. Paul Tillich described God as the ground of all being. Being is all encompassing and includes both deterministic as well as statistical reality. Tillich also believed that God's "directing creativity" should NOT be understood in a deterministic way, in the sense of a divine design decree "before the creation of the world." God's creativity works though the spontaneity in nature and freedom in humans. The historical process is contingent on the interplay between freedom and destiny.

Creativity, the principle of novelty, is a universal of process theology. Our freedom eliminates a preordained determinism. God is not coerce but guides and lures the universe in a continuing process. God has both a primordial and a consequent nature. In the latter, the creative process affects God.

We are "created co-creators," according to Philip Hefner. God through the process of evolution created us with freedom and responsibility to participate in the ongoing process of creation.

Gordon Kaufman considers humans as biohistorical beings. God is not "a being" but serendipitous (fortunate) creativity, which is manifest (throughout the universe from the "big bang" on) in the trajectories (or directional movements) that emerge in the evolutionary development of the cosmos and of life (including human life) on planet Earth.

Teilhard de Chardin sees God in all things and evolution as progressing towards the Omega Point:
"The end of the world: the wholesale internal introversion upon itself of the noosphere, which has simultaneously reached the uttermost limit of its complexity and centrality. The end of the world: the overthrow of equilibrium (Heat Death), detaching the mind, fulfilled at last from its material matrix, so that it will henceforth rest with all its weight on God-Omega."

Taoism interprets randomness and deterministic rules as complementing and balancing each other in creative tension.

Global laws and randomness have analogues in Judeo-Christian religion. Global laws are analogous to liturgy, such as the Lord's Supper, which never changes. Randomness is an element in the "whisper of God's grace."

Grace is when God gives you something you do not deserve, in contrast to
Mercy: God keeps you from getting what you deserve.

Smith, Houston, 2001, Why Religion Mattters: The Fate of the Human Spirit in and Age of Disbelief, HarperSanFrancisco