"One who has art and science also has religion. One who does not, better have religion." Goethe

The mathematical beauty of modern science emerged from the mystical beauty of ancient myths, illumined by spiritual art, which explained the natural world. Forms created by artists have later been analyzed by mathematicians. A modern trend is for science and mathematics to influence art and music. 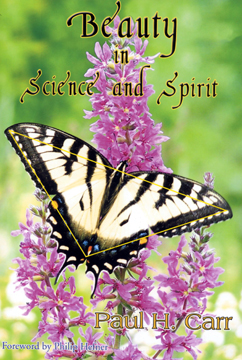 -The Divine Proportion (For the butterfly above, he ratio of the top of the triangle to its sides is 1.618.)

-Influence of Science on Art.

-ICONOCLASH: Beyond the Image Wars in Science, Religion, and Art

On , President Bush stated that intelligent design and evolution should both be taught in biology classes so that "people can understand what the debate is all about." I propose that the complementary beauty that comes from the yoking the rigor of science with the meaning of spirituality should be taught in social studies. "Intelligent design is an interesting philosophical or theological concept, but not one that should be taught in science classes." (Resolution passed by the American Association for the Advancement of Science.) Intelligent design raises the question: "What is the boundary between science and spirit?" We will deal with this in the next three chapters

-Complementary beauty should be taught 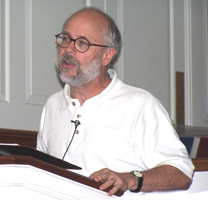 3. FROM THE "MUSIC OF THE SPHERES" TO THE BIG BANG'S WHISPERS "

"The teleology (goal) of the Universe is directed to the production of beauty." Whitehead

. Even though our concepts of the universe have changed, we humans perceive it as awesome and beautiful. In this sense, beauty is eternal. Astronomer Mario Livio (2000) has called this the cosmological aesthetic principle. Our understanding of the whispering (big bang) cosmos is based on the mathematical language of general relativity. Astronomy emerged from the beautiful stories and numerology of astrology. The Greeks viewed the earth as being in the center of concentric spheres, which carried the planets and made the beautiful "music of the spheres."

-Ancient Cosmology: The "Music of the Spheres"

-The Copernican Revolution: "The sun at the center of the most beautiful temple."

-The Whispering (Big Bang) Cosmos: From Hydrogen to humans. 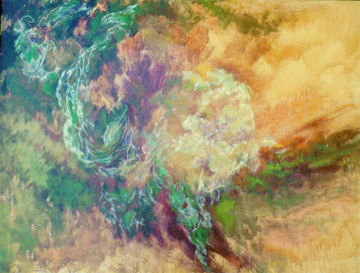 Artist Elvira Culotta's acrylic painting "Light Through the Trees." It is reminds the author of the supernova or nebula below. People sometimes interpret a painting in a manner that the artist never intended. 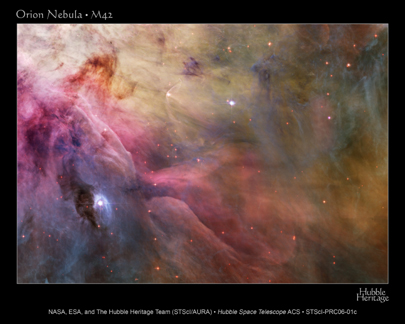 Orion Nebula M42 formed by the explosion of a star at the end of its life (NASA, STSci.). New stars are being formed from the gravitational attraction of the dust.

-Fusion reactions in stars synthesize the elements up to Iron 57.

-Stars explode into supernovae & thereby make elements up to Uranium 92.

-Gravity causes this dust to coalesce into new stars and planets.

-We are made of stardust! The Cool Cosmos: "Whisper" better than "Bang"

"The development theory (evolution) implies a greater vital force in nature, because it is more flexible and accommodating, and equivalent to a sort of constant new creation." Thoreau

We will trace the transition from mystical to mathematical beauty in American thought: from the theologian Edwards in the 18th century, through philosopher Emerson and naturalist Thoreau in the 19th, to the mathematician, Mandelbrot in the 20th.

-To mathematician Mandelbrot: discovering the fractal beauty of nature 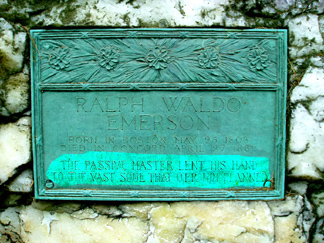 "The passive master lent his hand

To the vast soul that over him planned."

The beautiful fractal geometry of nature gives new insights for answering the question raised by Albert Einstein. Fractals, like evolution, are characterized by the complex interplay between randomness (dice) and natural law. Chaos theorist Joseph Ford would answer: "God plays dice (randomness), but they are loaded dice (by global laws)!"

-The Fractal Geometry of Nature 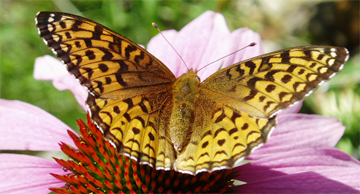 beauty that rejoices and humbles,

beauty remote from all that is meant by words like random or purposeless, utilitarian or materialistic."

6..A THEOLOGY FOR THE "FORMS MOST BEAUTIFUL": Haught, Teilhard de Chardin, & Tillich

"Life decomposes and out of its throes it recomposes: it persists in perpetual beauty while it is perpetually perishing"

John Haught, in our day, as well as Pierre Teilhard de Chardin and Paul Tillich in the last century, have formulated a theology for what Darwin called "the evolution of forms most beautiful," which have a "tragic beauty."

-The Evolution of Life

- of Relating Science and Religion 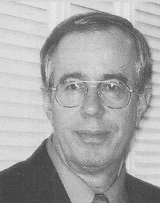 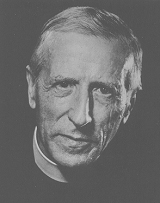 7..THE BEAUTY AND POWER OF TECHNOLOGY TOUCHING THEOLOGY

"Culture(technology) is the form of religion. Religion (theology) is the substance of culture." Paul Tillich (1963)

The beauty of medieval cathedrals symbolizes the power of technology and theology. The theology of a transcendent God inspired the construction of these magnificent structures. The technology of flying buttresses on the outside walls enabled them to reach "celestial heights" without collapsing.

-Technology and Theology Interact with Beauty and Power 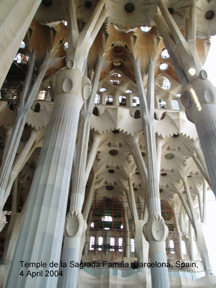 8..THE BEAUTIFUL : SPIRITUALITY AND SCIENCE

Modern irrigation technology is working with theological motivation to make the desert bloom.

-Spirituality, My Pilgrimage, 1997 -Science and Technology, 1993 -The beauty and power of spirituality (theology) and science (technology) 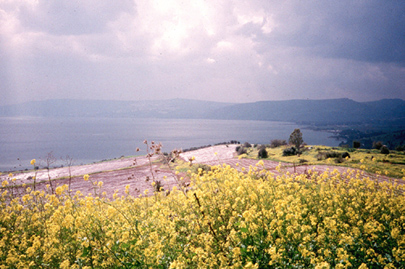 from the Mt.of the Beatitudes.

"Consider the lilies of the field, how they grow; they neither toil nor spin; yet I tell you, even Solomon in all his glory was not arrayed like one of these." (Math. 6:28):

9. THE BEAUTY OF NATURE VS. ITS UTILITY: THE ENVIRONMENTAL CHALLENGE

We are learning by bitter experience that the organism which destroys its environment destroys itself…. This can only be corrected by the enormous discovery of those relations in nature, which make up the beauty of nature (Gregory Bateson 2004).

The intrinsic beauty and value of nature is continually being challenged by those what to use it. The environmental challenge is to balance ecology with economics.

-The Challenge: "Earth on Edge"

-Knowledge of the Earth Sciences

-The Forces of Spiritual Values

-A Global Ethic and Vision

-Consecration and Conservation: as a Sacred Site

-What We Can Do 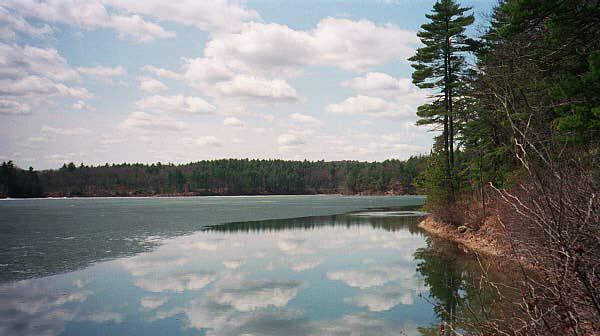 10. THE COURAGE TO CREATE BEAUTY

"In creativity, mind is brought together (from various levels.) This integration is a close synonym of beauty." (Gregory Bateson)

Beautiful art and music are not only expressions of creativity, they inspire creativity. Creativity in a scientific context is called insight (eureka), and in a spiritual context, transformation or revelation. They both emerge in four steps. Creativity can be a link between science and spirituality. 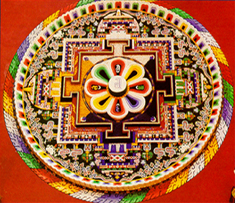 Nobel Laureate (1987), Alex Mueller, conceived the idea for the new high temperature superconductors while meditating on a mandala ( Magazine).

"Every civilization has a cosmic world view - a Story by which all is understood and evaluated. The prevailing Story shapes a culture's attitudes, integrates its knowledge, dictates its methodology, and directs its education." (Augros & Stanciu 1984)

Image of the universe only 0.4 Million years after "the beginning." The Wilkinson Microwave Anisotropy Probe measured this image of the temperature fluctuations. The cooler blue regions could have "seeded" the stars and the galaxies. (NASA/WMAP Science Team). 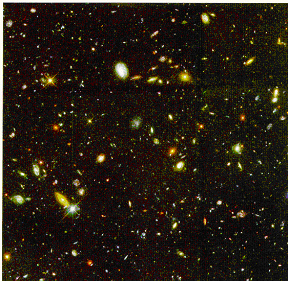 Hubble telescope deep field image of galaxies 12 million light years away, formed about 2 billion years after the "biginning." Only one star is visible. (January 15, 1995, STSci, NASA)